The Commonplace of Things

Dimensions Variable (DV) presents a solo project titled The Commonplace of Things by New York & Miami-based artist Marcos Valella. The exhibition opens on October 22, 2022 and runs through January 10, 2023 in the Project Gallery.

On one of Marcos Valella’s minimally splattered and assemblaged new paintings, hidden within the folds of fabric he’s stapled to the frame, is a door. It’s not a painted door, but rather an arched aperture cut into the cloth. Valella likes to consider it as an exit—a hole through which to leave the painting (both this specific one, I imagine, and Painting in general). But openings are always two-directional, so let’s use it as an entrance.

Valella has been in a slow process of emptying out his paintings. When we first met, about a decade ago in Miami, the surfaces of his canvases were oil-slicks stirred with never-ending brushstrokes. The palettes—sometimes muddied and subdued, other times a blast of rainbow—and the emphasized brushwork both exclaimed the painterly act of a painter painting. But the finished products had something else on their mind. They weren’t quite abstractions. They were more like records of painting. Painting’s receipt.

From there, Valella started experimenting with what he could take out. The endless swirling gyre of a paint-loaded brush was replaced but the same motion done in pencil, with the resulting shapes filled in randomly with swatches of color. And then the paint went as well. In its place came fishing lures and pushpins. These allowed the painter to make a painting without actually painting. Or at least without using paint. They also allowed him to get away from decision-making. While a brushstroke is permanent (even if painted over, it remains: a pentimento, a dirty secret) the pushpins and lures could be rearranged at will.

But then, these went too. Valella moved beyond the edge of the canvas, using balsa wood—throughout, there’s an affinity for the hobbyist’s materials—to build walls around the paintings, and on one side cut an opening (a door) through which he would blast a jet of spray paint. The resulting mark looked like painting: a miniaturized version of heroic abstraction. But it also looked like light creeping across an empty floor.

There’s that Guston quote about emptying out the studio. Getting rid of all influences, until it’s just you. The reward is clear. You’re left with the singular, the sui generis, the stuff that only one artist—you—can make. The risk… is less fun to talk about. Not only is emptying out isolating, if taken too far it can leave you with nothing. An overzealous spring cleaning of the soul. Or, to borrow a phrase: erasing oneself into a corner. But if you’re lucky, and Valella’s new paintings feel lucky, sometimes you turn around, and find a door.

So you step out, and look onto an empty room. Studio or gallery, what’s important is a contained architecture of possibility. Which historically is another way to think of painting: a storehouse of pictorial space, or an index of gesture. With these works, Valella has reversed the flow of his painting. He’s turned the truck around, started bringing things back in. Like the earlier works, he moves toward the everyday material. While some painters fetishize their materials, devotionally preparing custom linen frames with coats of gesso and rabbit-skin glue, Valella opts for another route. These canvases come premade from art supply stores like Blick. They’re for students, hobbyists, amateurs. In this, Valella embraces the non-hierarchical, the affordable, the democratic. Who said painting—especially painting that at first reads as difficult, conceptual—can’t be for everyone?

Onto the mass-produced surface floats a light flurry of gestures. Using different types of spray and liquid paint he flicks just enough pigment onto the canvas to have it read as “Abstract.” The marks vibrate uneasily between painting and performing painting. That is, Valella attempts to constrain his ability. To present the painted mark not as something unique and unfolding, the result of artistry, but rather a readymade product. They could, unsuccessfully, be seen as disenchanted. As if he’s phoning it in, but from within the room.

And back come the fishing lures and pushpins, both of which can be removed and rearranged at will. Their presence, alongside the open-source drip painting, presents two poles through which these works vibrate. One on end, painting is determined, historicized, finished. On the other, it’s eternally open-ended. To be sure, this discussion is much larger than this series of work, but it’s one of Valella’s central concerns.

The biggest addition to these, and the first one viewers will notice when they come into the gallery, is the loose-hanging shawl of fabric Valella has draped around the edge of the paintings. Like his other materials, these are sourced with an eye toward the humble and everyday. Canal Street scarves, bed sheets, beach towels: each has the power to pull the painting in a new direction, to welcome a separate lexicon of visual information into the gallery. This element departs from his balsa wood works in a major way. More than just being a soft frame—a flowing intermediary between painting and wall—they suggest, rather, implore portability. He’s included handles.

Painting as container, container as painting. Again: a larger discussion, and an older one too—one stretching back at least to Classical kraters. But also, it’s hard to think of a form more fitting for December in Miami. The works hang dormant on the gallery wall, evoking everything from David Hammons’ trash bag paintings to a walk-in closet full of Birkins. They are paintings to be pulled from the wall, carried out of the gallery. And just to emphasize further toy with the architecture of retail, Valella concludes the exhibition with two shaped paintings. Functioning as a decal is an enlarged Nike sign, too linked to sportswear to be seen as a sleek modernist form (though we can try). And then there’s a door. 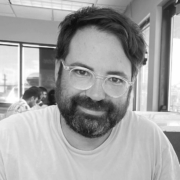 Marcos Valella received a Master of Fine Arts in Painting and Drawing from The University of Iowa. He is the recipient of the Here and There Grant – Berlin, Bass Museum of Art, Miami Beach; a resident at the Institute of Contemporary Art (ICA) Miami, SOMA Artist in Residence, Mexico City; a participant in Dialogues in Cuban Art artist exchange program, Havana, and a resident in Andrea Zittel A-Z West.