Dimensions Variable (DV) presents a solo project by Santiago, Chile-born, New York-based artist Felipe Mujica. Mujica will be hanging a selection of his signature Cortinas (curtains) in response to the project in the main gallery by Ricardo Alcaide.

Mujica’s work is influenced by the social and political movements of the ’60s and ’70s, and elements from graphic design and advertisement, that bring together the pictorial and popular culture. As a Latin American artist living in the United States, his discourse is influenced by his geographic displacement, since for him there is no center or real periphery.

Felipe Mujica will present several works of his ongoing series Curtains (begun in 2006). These pieces are made of different fabrics or textile procedures and are often exhibited hanging in different points of the exhibition space, creating a sort of new, soft architecture in the gallery. As Alcaide´s Horizon with its colored slabs, Mujica´s Curtains transform the spatial scene. Change is constant as the curtains can rotate when they interact with currents of air or with the movement of passing-by spectators. The architectonic character of his intervention speaks of the artist´s interest in radical constructive practices of the twenty-century, from International Constructivism to the School of Valparaiso in Chile, active since 1952.

Each of the Curtains carries a specific design of Mujica, belonging to a series based on the interplay of vertical, horizontal, and diagonal lines. Through the years he has amassed hundreds of these designs in a series of notebooks. Initially, it was the artist himself who tailored each of these designs in the fabrics. However, since 2012, Mujica has made of the production process of the works moments of collaboration and, on occasions, social situations. Some of the Curtains exhibited in DV were sewn only by the artist while others were produced with groups of women in Gothenburg over a period of two weeks in 2018. The artist met with them regularly to sew and socialize around the traditional Swedish fika—sharing time with friends and colleagues to have a cup of tea or coffee. Sewing, in this latter case, was done in a group whilst sharing from banal conversation to discussing common interests and concerns. In this way, this series by Mujica is similar to Alcaide´s practice regarding two aspects. Firstly, the important role that manual work has in the process of production and, second, their mutual recognition of a larger (social) horizon, a shared ground of experience. 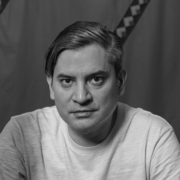 Felipe Mujica (b. Santiago, Chile; lives in New York) creates works comprised of installation, drawing, collapsible sculptures, and printmaking. His fabric panels—or curtains, as he describes them—operate as both sculptural objects and functional architectural interventions. They often serve as modifiable extensions to the space in which they are displayed; some of them are movable, redirecting the viewer’s passage through the exhibition and thus proposing a dynamic composition that is not determined in advance, but varies depending on the interaction with the work. The geometric designs of most of these curtains come from formal exercises, almost infinite variations of different made-up girds, all of course based in his interest in the historical avant-gardes, both European and Latin American. Another fundamental aspect of his practice is to open up his art to dialogue with others through a socially engaged production. For example, in his project for the 32nd São Paulo Biennial, Mujica worked in partnership with Brazilian designers and embroiderers from a local community to employ their personal knowledge and techniques to produce the panels. In Mexico for the XIII Bienal FEMSA, Mujica worked in partnership with the Wixárikas artisans from Zacatecas to introduce their cultural knowledge and traditional beading method into his abstract designed panels.