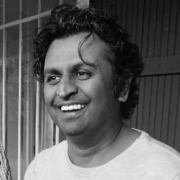 Patel often researches by sequencing images, these could be of artworks or broader culture into various configurations, often linear stories, through which emerges a kernel of knowledge in its own right outside of written language. The visual is privileged not to eschew written language. That this, this method might help spur new written language, but images are not a means to an end. He refers to the stories either exclusively images or in the form of images and text, he create as visual diaries.

What Patel proposes is to create visual diaries maybe one per artist (or several for a few of the artists) who was in the recent exhibition commemorating Dimensions Variable’s (DV) 10th anniversary. In particular, a focus will be considering the artworks of these DV artists in the context of those by well-known (or relatively well-known) contemporary artists, based outside of Miami. However, this is not the point or the endgame of these visual diaries: the goal is to create new knowledge emerging from the works of artists in the anniversary exhibition as well as other ones. Patel is considering doing studio visits so that his research can be more directed. Artists, though, would not dictate the content. Ideally, what he comes up with spurs new lines of thinking for them.

Alpesh Kantilal Patel is Associate Professor of Contemporary Art and Theory at Florida International University (FIU) in Miami. His art historical scholarship, criticism and curating reflects his queer, anti-racist, and transnational approach to contemporary art. His research has been supported by grants and fellowships from the National Endowment of Humanities, Arts Council England, Fulbright Foundation, and Cranbrook Academy of Art. He is the author of Productive failure: writing queer transnational South Asian art histories (Manchester University Press, 2017) and a contributor to numerous scholarly volumes and peer-reviewed journals. His current book project, tentatively titled “Transregional Entanglements: Sexual Artistic Geographies,” deliberately stages collisions and encounters between aesthetic practices that may appear unrelated at first glance. It does so to enact, perform, and instantiate cross- cultural contexts for sexual artistic geographies and thereby to bring into being a new world of intimacy and relationality across multiple times and spaces. At Miami Beach Urban Studios Gallery, he organized and edited the accompanying catalogs of the solo exhibitions mounir fatmi, Tom Scicluna, Paul Donald and Saravanan Parasuraman. He has written over 50 reviews of exhibitions in Miami and throughout the world for magazines such as frieze, Hyperallergic, Artforum, artforum.com, and Art in America. Prior to arriving at FIU in 2011, he worked in the curatorial and director departments of the Whitney Museum of American Art and the New Museum of Contemporary Art, both in New York City. Patel received his PhD in Art History & Visual Studies from the University of Manchester and a BA in History of Art with distinction from Yale University. In 2021, Intellect Press is publishing Storytellers of Arts Histories (co-edited with Yasmeen Siddiqui), an anthology of over 30 original first-person narratives from an international, inter-generational group of emerging and senior archivists, artists, curators, and art historians.