You Are Always Here—Catalina Jaramillo

You Are Always Here

Jaramillo’s project for DV deals with issues raised from the death of a loved one, in this case, the artist’s mother. Through this installation she celebrates the obsessive tendencies that some manifest when there is loss and grief. The work will be an accumulation of memories and objects left behind. In reviving the memory of her departed mother, the artist will go through a series of rituals that serve as bereavement vehicles in many cultures.

In You Are Always Here, objects that are exclusive to the relationship between the artist and her mother
will hopefully create a dialog that will trigger the public’s awareness of their need for affection. To Jaramillo, the objects will give her a sense that the deceased will never be gone, they will explore notions of transience and impermanence.

The Installation will combine performance, video, photography, and sculpture. The objects, installed obsessively and assembled neatly throughout the space, will reveal how mundane objects can become sacred when the person they belonged to is gone. Ranging from hair color boxes and makeup, to lists, notes, and cleaning supplies, they all form a miniature world that viewers can explore. Ideally, the public is invited to take some of these deliberately displayed objects with them as an attempt to distribute her all around and remind the public of the intrinsic need for affection. 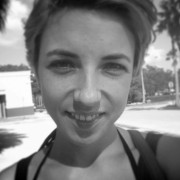 Catalina Jaramillo was born in Bogotá Colombia in 1980 and currently resides in South Florida. She has curated exhibitions for the Patricia and Phillip Frost Art Museum and Francie Bishop Good. She works as the Administrator for Girls’ Club Collection. Jaramillo graduated, with honors, from Florida International University where she received her Bachelor of Fine Arts and Bachelor of Religious Studies in 2005. She received her Masters in Asian Studies in December 2009.

Catalina Jaramillo’s work include Open at David Castillo Gallery; The Passing at Calix Gustav Gallery; Sound Art at 18 Rabbit Gallery; Abracadabra at the Art and Culture Center of Hollywood and Facsimile at Girls’ Club Collection. Her works can be found collections such as Girls’ Club, Bonnie Teller Swerdloff and Fom Design Co.