In collaboration with the Miami Dade College Museum of Art and Design, this presentation at Dimensions Variable of the work of Berna Reale launches Living Together, a six-month-long, cross-disciplinary series of performance art, film and video screenings, talks, and workshops held in venues across the greater Miami area and reflecting the cultural, social, and political realities of life today. 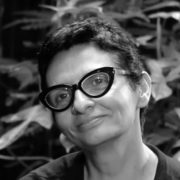 Berna Reale (b. 1965, Belém (PA), Brazil) works with installations and performances. She studied art at the Federal University of Pará and has taken part in solo and group exhibitions in Brazil and abroad as well as in several Biennials. Violence has been the main focus of her work in recent years. Reale became a criminal expert at the State of Pará Centre for Scientific Expertise and has close experience of a range of crimes and social conflicts. Her performances are conceived with the aim of creating a commotion so as to provoke reflection. She lives and works in Belém, Brazil.

If Defined, Then Undefine—
Jamilah Sabur

A Thread of Execution
Scroll to top