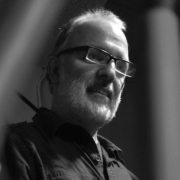 Born in Caracas in 1957 and living in Miami since 1979, Gustavo Matamoros is a local sound artist of international repute in the fields of experimental music and sound art. His practice focuses on the exploration of sound as audible description of change and as a tool for developing an ever closer relationship with what Buckminster Fuller referred to as The Environment—that which surrounds the individual.

A Thread of Execution