Fifteen years after leaving Miami where he served his two year tenure as Director of Wolfson Galleries at Miami Dade College, Goran Tomcic returns with an exhibition of his work at Dimensions Variable.

Heart Strings is an installation composed of twelve corresponding works, all made with the three materials: hanger wire, fishing line, and Mylar sequins. During the tedious process of nearly a year, thousands of strings with heart-shaped sequins as well as the other shaped sequins (leaves, flowers, shells, cubes and circles) were made and then assembled into the hanger wires displayed as wall and suspended collages.

Known for his commitment to process, Tomcic has earned acclaim for his ability to discover the inherent physical characteristics of the objects and materials and transform them into art.

Tomcic’s large-scale installations and objects had been shown extensively in the past 15 years both in United States and Europe. He currently lives and works in Berlin, Germany. 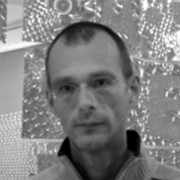 Goran Tomcic is an artist and writer. Born in former Yugoslavia in 1964, he is Croatian and US citizen, and currently lives and works in Berlin. He holds an MA in Curatorial Studies from the Center for Curatorial Studies at Bard College (1996). Since 2000 he has shown his art internationally and is a recipient of the Pollock-Krasner grant (2007). His poetry and art criticism has been published internationally from the mid 80s.