Death of a Printed Story—Fabian Peña

Death of a Printed Story

Death of a Printed Story is a comment and personal reaction to the inexorable massive presence of printed propaganda in our everyday existence. In a predominantly visual culture that overproduces printed material, the piece explores the relationship between reality and simulacra, creating a scenario where media begin to reign in contradictory and conflicting rivalry with themselves. Reality has been frozen and stopped in time by this grey matter which covers the room and detains life and movement. Deconstructing the logos that suffocates us in an abstract space is at once both threatening and delicately meditative. Compressed paper rolls and grey pulp made by combining pages from history, religion, fashion, pornography, and art magazines are reassembled to produce a mixture that is completed once the spectator, as part of a complicit relationship, steps into the space. The material has been used as an organic and invasive substance, reducing the space to a grey zone detained in time. The material that once had contributed to build our culture through centuries, defining both, our individual and social psychology has expanded as an incontrollable plague through the space denoting its devastating scatological and destructive implications. 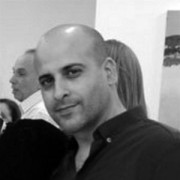