A trilogy of shorts where Sabur approaches film as love letters, exploring dissonance, dislocation, and the uncanny.

A love letter to death. Elijah Rock by Mahalia Jackson was playing in the studio and I slipped into a trance where the only goal was “becoming.” When a possum is under threat, it plays dead to avoid death. The space in the studio became a world I felt close to— I was underwater on the moon. In composing the video during the editing process, I composed a score for the first two-thirds but used American composer Jon Forshee’s score “Sinew” as the structure to edit the video. I wanted to create an atmosphere in the video that appears to be like the changes in ambient pressure, like what happens to a body that slips into the cold airless void, when the human body is suddenly exposed to the vacuum of space or deep water—sudden depressurization. [Jamilah Sabur]

A love letter to the moons of Saturn. Moon Tendon is a perceptual play with texture, space, and locomotion. Sabur’s stream of consciousness work presents Galileo as a life-sized doll-like figure with bells in his mouth; and incorporates open source NASA footage of a hurricane on Saturn swirling inside a large, mysterious, six-sided weather pattern known as “the hexagon.” An encounter with Galileo’s Acceleration Experiment and his writings to the Duke of Tuscany about his observations of Saturn’s rings in 1610 influenced the arrangement of the video. Alternating between found footage, a constructed set, and recruiting Robert Smithson’s Spiral Jetty to perform on. Sabur presents a distant mental landscape. Moon Tendon features “Tendon” a score created by American composer Jon Forshee on UPIC, a computerized musical composition tool, devised by Iannis Xenakis.

A love letter to fear. A piece about a part of Jamaican identity that is so ingrained in the cultural identity on an almost pathological level; the fear of lizards, especially the croaking lizard, a lizard from the Gecko family. A figure finds themselves in a space where they are afraid to check their mail because they’re afraid to see the lizards in the mailbox. It becomes a whimsical portrait of a single consciousness engaged in a non-linear, self-reflective act of overcoming fear. Thinking about the subconscious residue of sound and voice, getting inside this residue; Sabur composed a soundtrack with the key of creating subconscious voice. This work includes moments of speech, singing and a chant-like recitation of the verses from a popular 1976 Jamaican reggae song by Max Romero and Lee “Scratch” Perry called “Chase the Devil,” (another version of the song was redone by The Upsetters and Prince Jazzbo called “Croaking Lizard”).

Maps were disabled by the visitor on this site. Click to open the map in a new window. 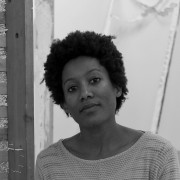 Jamilah Sabur is an artist working across various disciplines including performance, video, and installation. Sabur was born in Saint Andrew Parish, Jamaica and received her MFA in Visual Arts from University of California San Diego in 2014 and her BFA from Maryland Institute College of Art in Interdisciplinary Sculpture in 2009. She is interested in embodied cognition, social mimicry, dissonance, ritual, and the uncanny. She has recently exhibited and performed at Boston Center for the Arts, Boston, MA; Herron School of Art Gallery, Indianapolis, IN; Dimensions Variable, Spinello Projects, Miami, FL. Sabur lives and works in Miami, FL.